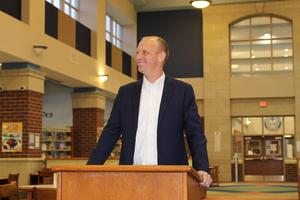 Mr. Jon Stoehr will replace Flynn Harrell as AD at DHS beginning July 1.
The Spartanburg District Six Athletic Department is proud to announce Jon Stoehr
(pronounced “Stair”) as the district’s new Athletic Director. The news was shared during
a meeting this morning with Dorman High School and the District Six coaching staff.
Stoehr will replace Flynn Harrell, who will retire at the end of June, after serving the past
15 years as Athletic Director at the school.
Stoehr is no stranger to the District Six family. He has coached at Dorman High as an
assistant in the boys’ basketball program for the past five years and as an assistant in
the boys' cross country program for the past three years. He was on the coaching staff
and played an integral role in three boys basketball state championships (2018, 2019,
2020) and two boys cross country state championships (2019, 2020) at Dorman. He
has also taught business education at the Dorman Freshman Campus since 2017.
Superintendent Dr. Darryl Owings says, “Jon’s experience in athletics and business
administration will be a true asset to our district’s athletic program. Not only does Jon
demonstrate a strong work ethic but he understands the value of building strong
relationships with students. Athletics is an important part of our District Six family, and
we are excited to have him serve in this new role.”
Coach Stoehr brings a wealth of athletic, coaching, and business experience into his new
position. He was a standout athlete at Mars Hill University where he ran cross country
and track from 2003 to 2007. Among his many collegiate athletic accomplishments, he
was first-team All-South Atlantic Conference in cross country for four years (2003-2006),
was the South Atlantic Conference Scholar-Athlete of the Year for two years (2005-
2006) and was a three-time USTFCCCA Academic All-American (2004-2006). He was
inducted into the Mars Hill University Athletic Hall of Fame this past November.
During his college days, Stoehr served as a student-assistant coach for the basketball
program at Mars Hill for two years. After graduating from Mars Hill with a BS degree in
sports management in 2006, he served the school as an admission counselor and an
assistant track and cross-country coach for two years. He then continued his education
earning a Master of Entrepreneurship from Western Carolina University in 2009.
Next, he gained valuable business experience as a manager for Fleet Feet Sports from
2009-2015.
From 2012 to 2017, Stoehr served as a sub-varsity and/or varsity assistant basketball
coach at several Greenville County schools including Riverside, Greer, and Blue Ridge.
He joined the Dorman teaching and coaching staff in 2017 and has earned respect from
players, coaches, and parents alike as a hard-working coach who is well organized,
adept at social media and marketing and who pays close attention to details that will
serve him well in his new role.
Dorman High School principal Mr. Bryant Roberson says, “I am excited to welcome Jon Stoehr
as the new Athletic Director of Dorman High School. I am confident that under his leadership we
will continue our Cavalier tradition of excellence. Jon Stoehr is a man of character, integrity, and
is committed to the success of Dorman Athletics. We are extremely fortunate to have Jon
Stoehr as our Athletic Director and are looking forward to a great future for Cavalier Athletics!”
Stoehr will officially begin his role as athletic director on July 1, 2022. He will begin the
transition process into his new position immediately.
Published March 28, 2022 Print